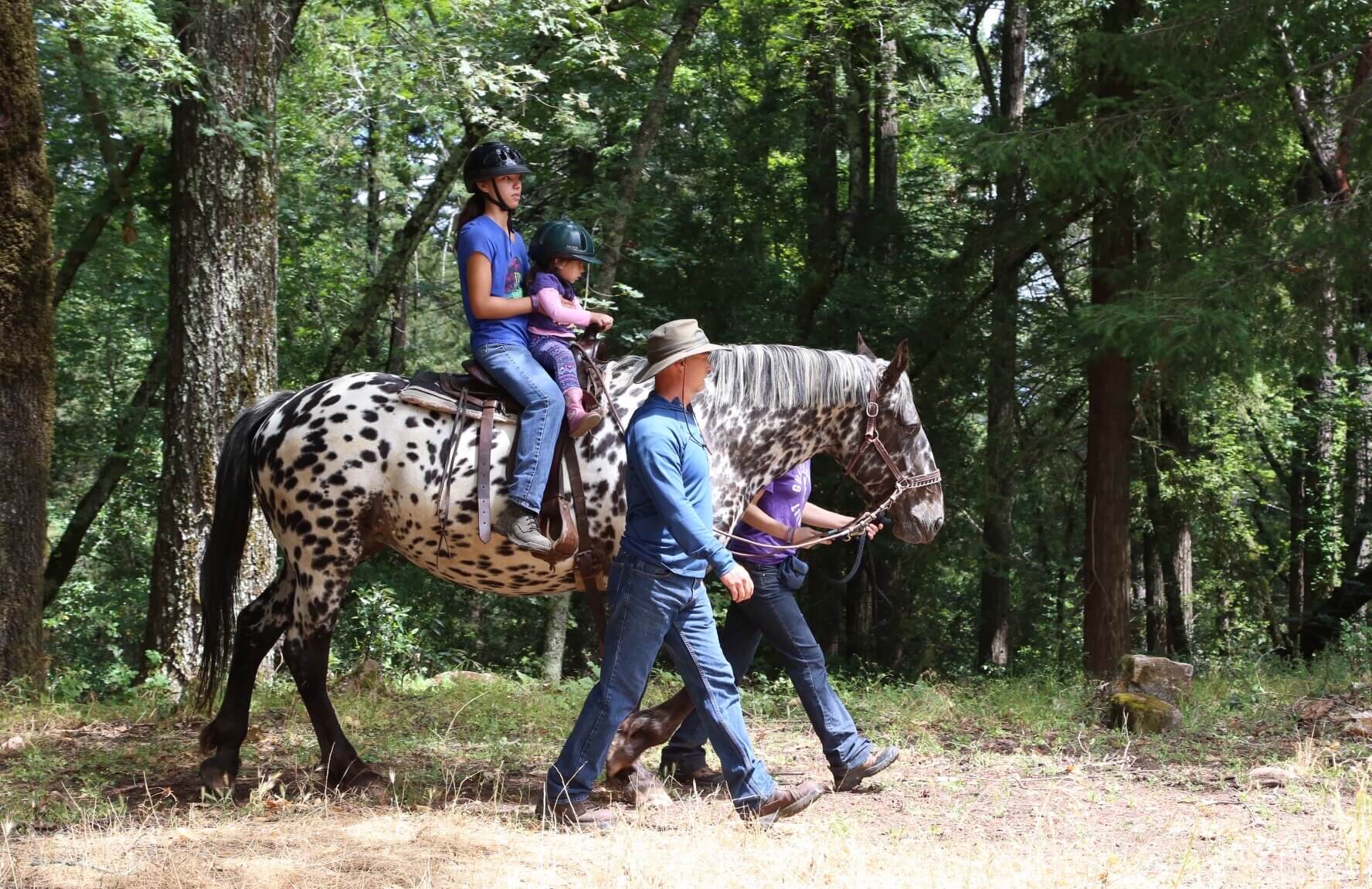 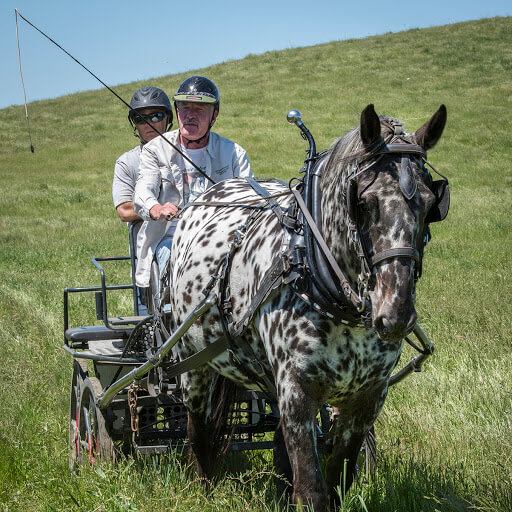 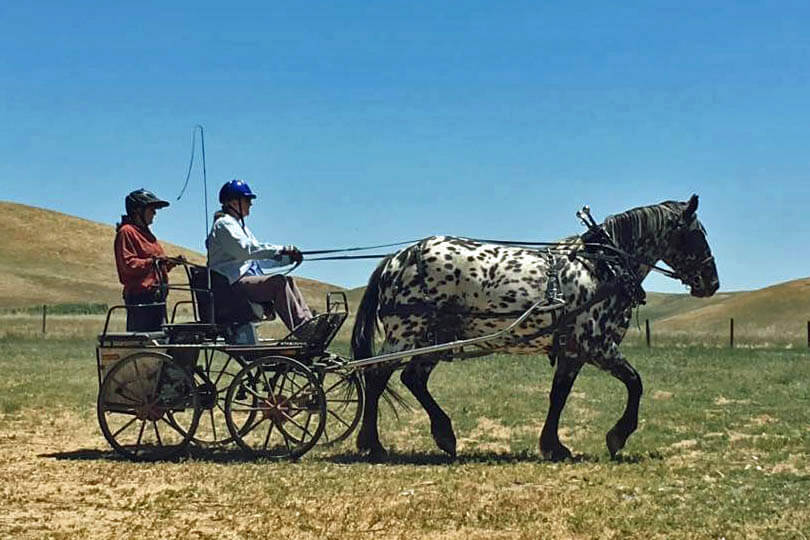 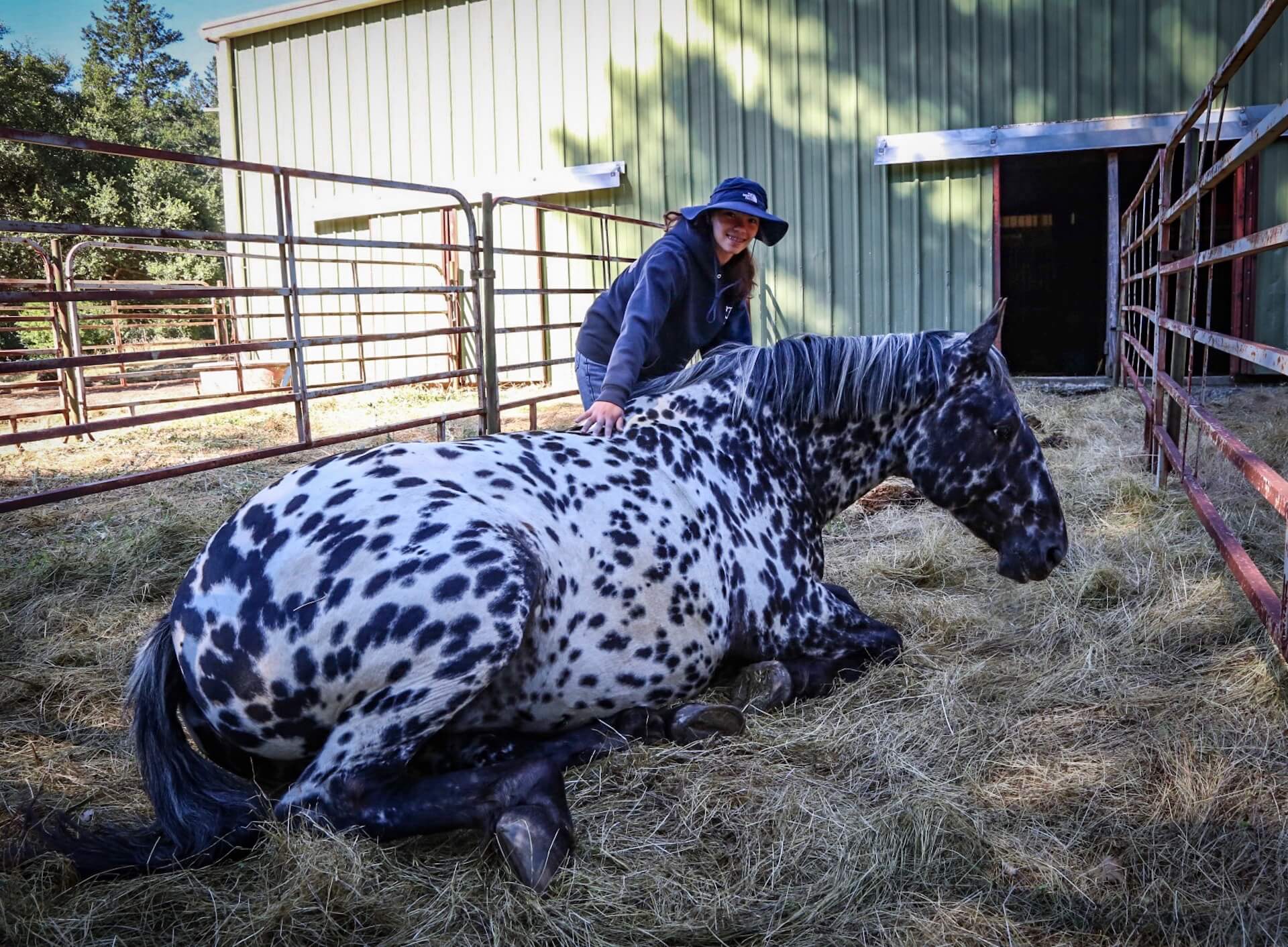 It is always interesting how a single horse can create a dynasty on a breeding farm, and a lasting influence on an entire breed of horses. Kentucky “hard boots”, those crusty born and bred horsemen and women of the Bluegrass, refer to a particularly productive and influential mare as a “blue hen”. Such a mare in the Stonewall Studbook is the Stonewall Sporthorse Champion, Stonewall Scarlett. She is the dam or granddam of fifteen exceptional foals (so far!), all of them striking leopards, or leopard factor. They excel in harness and under saddle, making consistently good dressage horses. Several of Scarlett’s beautiful granddaughters now have their first foals on the ground. We expect the legacy of Stonewall Scarlett will continue for a long time.

One of Scarlett’s granddaughters on our farm today is Stonewall Mystique, a daughter of the late Magique de Bec. His promising career as a stallion was cut short at a young age by his untimely death from choking in a Colorado stable. We have the only daughter of this whiteborn stallion, produced by the working Percheron mare Stonewall Debutante. This striking leopard mare was foaled in 2013.

In our Access Adventure programs, we often use Percheron horses from our good friend Lloyd Stueve, from Oakdale, California. Among his good mares that have served us well is the purebred Percheron mare “Debbie”, recorded in the Stonewall Studbook as Stonewall Debutante. I was about to load her in the trailer to return her to Oakdale when I noticed she was in season. I looked over at the eager young stallion Magique de Bec and decided that a test mating was the order of the day.

I called Lloyd, a very agreeable and generous fellow. “Do you mind if we breed Debbie before we send her home?” Lloyd replied, “I don’t mind, as long as you’ll raise the foal.”

That was all I needed to hear. The eager Magique was pointed downhill toward the big, receptive, black mare and the young stallion was introduced to the exciting world of horse breeding. “Slam, Bam, Thank-you, Ma’am!” and Debbie was loaded on the trailer for the trip home.

I called Lloyd several months later and asked him (an experienced horseman and professional dairyman, wise to the ways of livestock pregnancy), “Do you think Debbie is in foal?” (Negative) Later, in the spring, the same question. (Negative).

I knew Lloyd was soon planning to send six Percherons, including Debbie, on a rigorous, ten day wagon train across the High Sierras. I consulted the calendar. If pregnant, Debbie would be due in about two week’s time. “Lloyd, are you SURE Debbie isn’t in foal? That’s a pretty tough trip you have planned,”

Once again, Lloyd replied, “No, Mike, I’m sorry, but she’s not pregnant.”

Ten days later, as the wagon train was approaching it’s final destination, I got a frantic call from Lloyd. “Debbie is going down in harness and I think SHE’S HAVING A BABY!”

Stonewall Mystique came into the world, a testament to her poor mother’s great work ethic. We almost named her “Highway 50”.

Mystique later joined us on “The Caravan, a Transcontinental Horsedrawn Journey.” This was her initial training. She has started under saddle and is a wonderful mare to drive. Mystique is already a cornerstone of our therapeutic driving program. She is now owned by the Hengel family, volunteers for Access Adventure. We have leased her back to work for our program and to raise a foal or two.