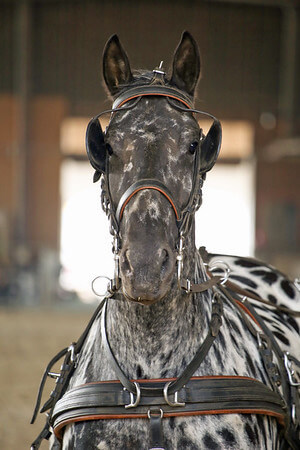 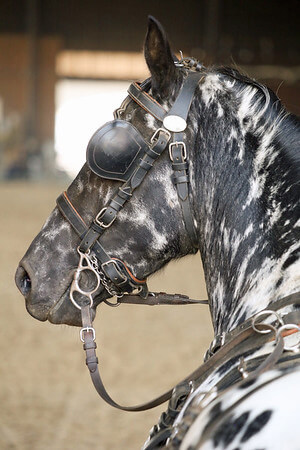 Samba is the second of three full sisters that grace our small band of beauties at Rush Ranch. She is the 2012 daughter of the imported Friesian stallion Apollo* (the Netherlands) and the prolific producer Stonewall Fantasia, a daughter of the imported Knabstrupper stallion Atlantis*(Germany). Samba has a 2018 foal by the World Champion Friesian stallion Monte* 378 Sport (the Netherlands).

Although many people cannot tell our three sisters apart from one another, they each have their own unique inherent characteristics. Samba is the heaviest and deepest bodied of the three, and pairs well with her cousin Mystique whose dam is a Percheron mare.

Stonewall Samba is trained to ride as well as drive, and is the favored mount of young dressage rider Tatum Baker. Besides pairing with Mystique, Samba is showing aptitude for the sport of combined driving, She is expected to make her competitive debut in 2018, after her foal is weaned.

Already an international traveler, Samba has trained in the Canadian Rockies at CanDrive and extensively with world renowned horsemen Clay Maier and Scott Monroe. Most recently, before going on “maternity leave”, Samba performed with Team USA coach Sara Schmitt at a United States Driving for the Disabled clinic in Martinez, California.

A mare with power as well as grace, Samba is up to the daunting tasks of motherhood, ridden dressage training, as a lesson horse for drivérs with disabilities, as well as the challenges of competition.

We are grateful to have this lovely example of a proven mare line dating back through the generations to Stonewall Crystal in 1981, a daughter of the 1967 National Champion Crystal Curtain. Noted members of this illustrious family include the Stonewall Champion mares Stonewall Blanche, Stonewall Stella and Stonewall Scarlett. Stonewall Samba is a full sister to the current upper level dressage champion Stonewall Fandango, trained and shown by Danish Grand Prix rider Sandra Hansen.