AN INSPIRATIONAL STORY: “SEVEN” Challenging The Limits of Disability 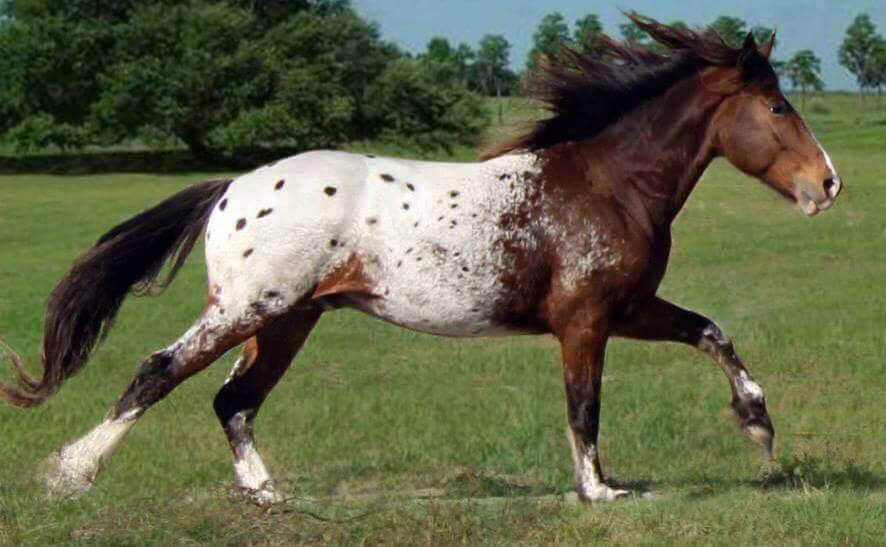 02 Mar AN INSPIRATIONAL STORY: “SEVEN” Challenging The Limits of Disability

Courage and motivation are sometimes found in surprising places. We would like to share this story from our friends in McAlpin, Florida at Rockin’ the Dots Ranch, American Sugarbush Harlequin Drafthorses and Stonewall Sporthorses of Florida. This active breeding farm is now the home of the matriarch of our current stable of Stonewall Sporthorses, the grand matron Stonewall Scarlett. She is hale and hearty at twenty-one years of age, carrying a foal by Rorschach’s Hextatic.

Terri Nutter, mistress of the farm, is a very active breeder and exhibitor of her cherished horses. She eagerly awaits the birth of each foal. On August 19, 2016, the mare Maggie Doux de Mes delivered a filly by Hextatic named RTD’s StepUpToMe. 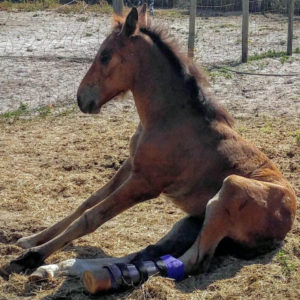 A bright bay, with a scattering of white spots, StepUpToMe, called “Seven”, appeared perfect in every way. Then, as she struggled to her feet for the first time, it became apparent that something was terribly wrong. Seven’s left hind leg was completely missing the foot. Her leg ended right where the hoof should be.

Most breeders and veterinarians simply cut their losses and put down a foal with such a severe birth defect. Terri had a different idea. Impressed with Seven’s desire to live, and her otherwise robust constitution, Terri made a commitment to help Seven survive.

Terri contacted a manufacturer and supplier of medical devices to explain her unusual predicament. The company was eager to help with this challenging endeavor. A foal size prosthetic was designed and fitted. Seven was up and running. She never looked back. Seven’s rapid growth requires careful fitting and frequent replacement of her prosthetic devices. She is a remarkable patient, with a promising prognosis to survive and to thrive. 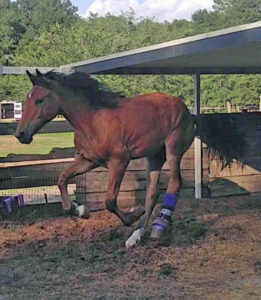 Terri realizes that the spunk and drive Seven exhibits will be inspirational to children and adults living with birth defects, or struggling to adapt to life after an amputation. Terri is committed to using Seven as an ambassador to show by example that disability does not mean inability.

Rock on, Seven! We admire your grit and determination.