My Hungarian sponsors made many advance arrangements for me, including booking “the rich American” into a posh hotel for my extended stay while training in Vesces, near Budapest.

I had other ideas.

I chose a nearby hostel off the internet and was delighted to be dropped at the charming establishment of Agi’ Schubert, a world traveler who spoke excellent English. This talent was not common in Hungary. I also appreciated the price of ten Euros per day (about $11+US). Somehow, this included grocery shopping and three meals per day! And a dinner cruise on the Danube through Budapest!

It was amazing to be a part of Dobrovitz Lovasfarm. Jozsef Sr. trains horses from 7AM to 9PM, seven days a week. There are more than 100 horses in that extraordinary stable. Three lads kept everything immaculate, fed all the horses, harnessed, listened for Jozsef to clatter into the courtyard with a sweaty four-in-hand, brought out and hitched the next four, then bathed the worked horses, tied them in the sun and went back to their neverending chores. Jozsef was never entirely satisfied, despite what seemed to me an exceptionally well-run operation.

Jozsef chose the great horse “Vodka” for my competition, and I had no reason to seek another. We trained each day in glorious Hungarian weather (just one rainy day) on a well maintained grass dressage court, cones course and hazards.

The Hungarians were not impressed with my first days driving. I had difficulty handling the reins for any length of time due to weakness, fatigue and numbness in my hands. The worst part was Vodka just stood there when I gave my usual commands.

I had to learn Hungarian!

Hilarity ensued at my attempts to learn the commands to walk, trot, canter, stand, back and a few more. Vodka eventually learned to understand me, but the groom’s laughter let me know I was still mangling the difficult language.

My trainer, Jozsef Jr. and my coach Kristof (Coachman for American Champion four-in-hand driver Chester Weber), worked on various techniques to assist my reinsmanship with hands affected by MS. We settled on a system of loops with rein clamps that solved my problems and allowed my arm strength to come in play to assist my weakened hands..

Finally, we were making progress, and the Hungarians began to believe my trip to Izsàc might not be a complete disaster. We shipped to the competition in central Hungary with a four-in-hand for Jozsef Sr., four for Jozsef Jr., two spares, my single horse, an assortment of presentation carriages, marathon vehicles, harnesses, grooms, clothing and more.

The Hungarian Equestrian Federation developed a spectacular, world-class course at Izsàc, the site of the Hungarian National Driving Championship and the International Championship for Drivérs with Disabilities. It was thrilling (and a bit intimidating) to enter the ring with a magnificent horse and complete a Championship dressage test on day one. Vodka took off like a turbo-charged rocket on marathon day, and this was my most challenging test in what is usually my strongest event.

The cones course on day three was exceptionally tight and tough. I made it through most of it without error when I overshot my mark and had to make a correction. This rattled me a bit, resulting in time and penalty points. Not bad, though.

I finished a demanding three days as the Champion Grade I Driver. Over the course of the event, I developed an unusual friendship with the eventual Grade II Champion, who spoke no English. The bond we shared and understood was our deep appreciation for the fine horses we drove, and the exhilaration we experienced with the near mythical melding of man and horse…the bridge that opens the doors of the world to us.

This was likely my last international competition, but I have never lost the tremendous excitement of participating in whatever life can offer, with no limits. I am deeply grateful for this unforgettable experience. 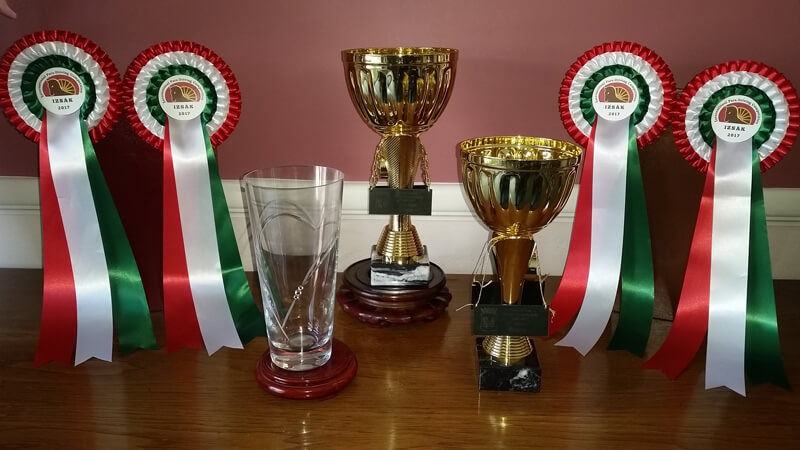